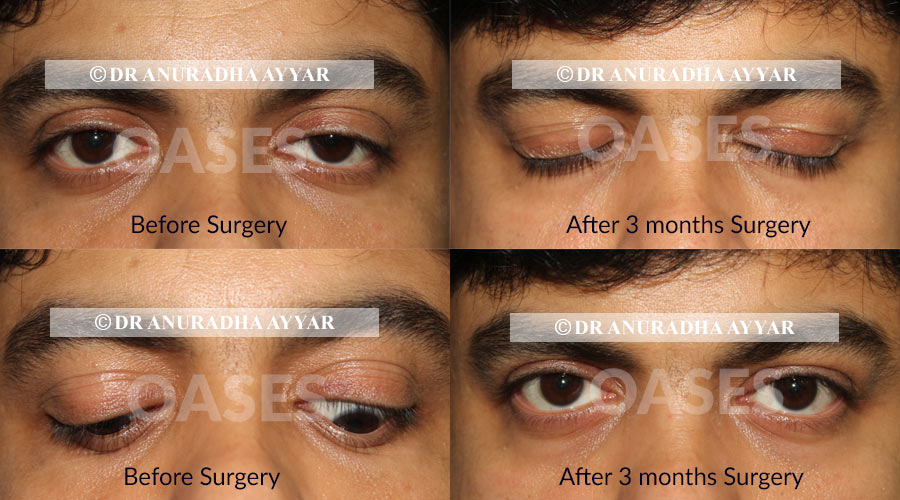 This young woman was previosuly operated three times for the ptosis since birth elsewhere. In one of the surgery, the levator muscle was excised to get rid of her jaw winking and frontalis sling with silicone was done.

Every ptosis surgery would give lasting results for 2-6 months after which the eyelid used to droop significantly to pre surgery levels.

We operated upon her using an open sky method of frontalis sling, and redoing and redefining her eyelid crease. The final result lasted the patient 2.5 years, following which she had some droop which was again corrected with tightening the sling. She is doing well since 2 years now.

Eyes are more than just organs of vision – they are also the most prominent features contributing to one’s facial aesthetic. However, in some cases, individuals develop a condition of the eyelid that is known as droopy eyelid or ptosis. While not always severe, this condition may over time impact one’s vision. Ptosis, or droopy or sagged eyelid, may be prevalent since birth, also known as congenital ptosis, or develop over time in life, also known as acquired ptosis. In some cases, this condition may only affect one eyelid (unilateral ptosis) or both (bilateral ptosis).

Droopy eyelid isn’t often a serious condition, but in extreme cases it may block the pupil affecting vision. To ensure that this condition isn’t an indication of any underlying medical condition and treat it timely, it is advisable to consult an Oculoplastic surgeon.

Droopy eyelid may be a cause of natural factors or may even hint at some underlying medical condition. Here, are some of the common causes or risk factors for ptosis. Weakened muscle in the upper eyelid since birth.

While saggy eyelids are the most obvious symptom, there are other signs one could watch out for as well.

In case you see any of these signs be sure to consult an ophthalmic surgeon specialising in Oculoplasty. Based on the time and onset of the droopy eyelid, the doctor may run some tests to determine the cause. These may include a routine eye exam, eyelid measure or a physical exam and a neurological exam. The doctor may also require the patient’s medical history for a diagnosis. If the doctor suspects muscle problems, a Tensilon Test may be advised. Based on the condition, the doctor may require additional investigation.

The treatment method will depend on the cause of the condition. In case of mild ptosis, the doctor may advise observation for a period before deciding treatment. However, in case of moderate or severe ptosis, instant treatment may be advised. Further, if this condition is found in children, early intervention is recommended to avoid visual damage. Long standing ptosis in children is known to cause irreversible astigmatism or poor development of vision. In this surgery, the upper eyelid or levator muscle is tightened which can lift the eyelid back to its appropriate position. To know about the risks involved and the specifics of the surgery, it is advisable to consult a specialised Oculoplastic doctor. A sling operation may also be advised wherein the forehead muscles are tightened to lift the eyelids.

Post surgery, you will be advised certain care practices by your doctor. Be sure to follow them religiously. Some of the instructions may include:

Thus, while this condition is not necessarily problematic in itself, it should always be checked out by an Oculoplasty surgeon to rule out any underlying condition.

Arundhati is a 14 year old girl who was born with a droopy left eyelid. Initially, she was being monitored by her general ophthalmologist and paediatrician who advised against any treatment or correction till she was 14 years old.

When she was taken to Dr. Anuradha Ayyar, an Oculoplastic surgeon, a thorough examination was done where the doctor found that the muscle that lifts the eye was weak thus making the eyelid droop.

Dr. Ayyar instantly advised for surgical treatment to tighten the muscle. To avoid any scars on the face the surgery consisted of a hidden incision thus leaving no impact on her self-confidence or beauty.

Since Arundhati had this condition since birth and it was not rectified earlier, she had a cylindrical number and as required to wear eyeglasses for corrective vision. By correctly diagnosing the condition and rectifying it immediately they could prevent further drooping of the eyelid which could hamper her vision. The only regret Arundhati’s family has is not approaching an expert earlier as it may have prevented any impact on the vision to begin with.

When we talk of beautiful eyes, we are actually commenting on the shape of the eyelids adorning the eye. Most of us have eyes that are similar in shape and size, but what makes all our eyes look so different is how our eyelids and eyebrows are shaped and structured.

This young woman complained of right eyelid droop and wanted that corrected. As a person habituated to aggressive rubbing of eyes since her teens, over the years she developed this picture. Aggressive rubbing of eyes in her situation had led to drooping of both upper eyelids (right more than left), along with a sagging of the lower eyelids and change in shape of her eyes.

Dr. Anuradha Ayyar performed an eyelid tightening procedure for the upper and lower eyelid, manipulating the structures back into position to restore her youthful look. Just a plain right upper eyelid droop correction would not have done justice to her. In medical terms a bilateral levator tightening with upper lid mini-blepharoplasty+minimally invasive lateral canthoplasty+lower lid retractor release was done under local anesthesia.

The most important advice to her post operatively was to quit rubbing her eyes, which she had not been entirely able to do yet, which led to some loosening of sutures placed at the outer ends of the eyes. Nevertheless the patient was still pleased with the end result.

This 26 year old woman had been suffering from repeated eyelid swellings which would come and go randomly since 12 years. Over time her eyelid skin had started to sag and her eyelids appeared droopy. She continued to suffer the episodes of eyelid swelling.

After thorough examination and tests, dr. ayyar diagnosed her to be suffering from a condition called blepharochalasis.

She was recommended eyelid tightening and drooply lid correction in same sitting through a cosmetic upper eyelid hidden incision. The advantage of an upper eyelid blpeharoplasty was for cosmetic as well as therapeutic purposes here.

With this surgery, the episodes of eyelid swelling would reduce as per research.

She underwent the surgery. and as predicted the number of episodes of eyelid swelling and severity dramatically reduced and her eyelid contour improved.

This gentleman had a family history of Oculopharyngeal muscular dystrophy. Twenty-two members in his family across three generations suffered from severe ptosis of the eyelid that started in middle ages.

He was discouraged from surgical correction by many doctors and relatives.

He consulted us at OASES, and after thorough assessment, we decided to go ahead with ptosis correction with Levator resection rather than Frontalis sling surgery, after fully understanding the potential risks and benefits of each.

Aim of the surgery was to elevate the eyelid to the point, the patient can see clearly and also obtain muscle tissue for biopsy analysis.

We achieved the same with good functional results. 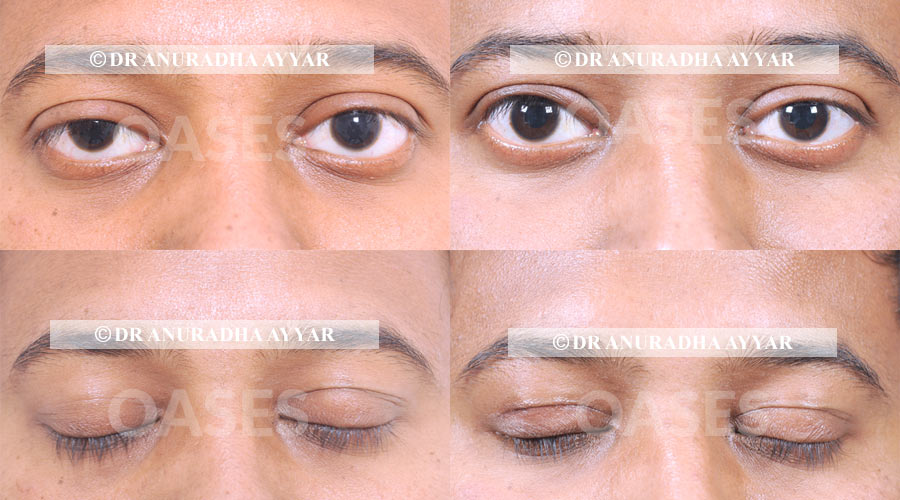 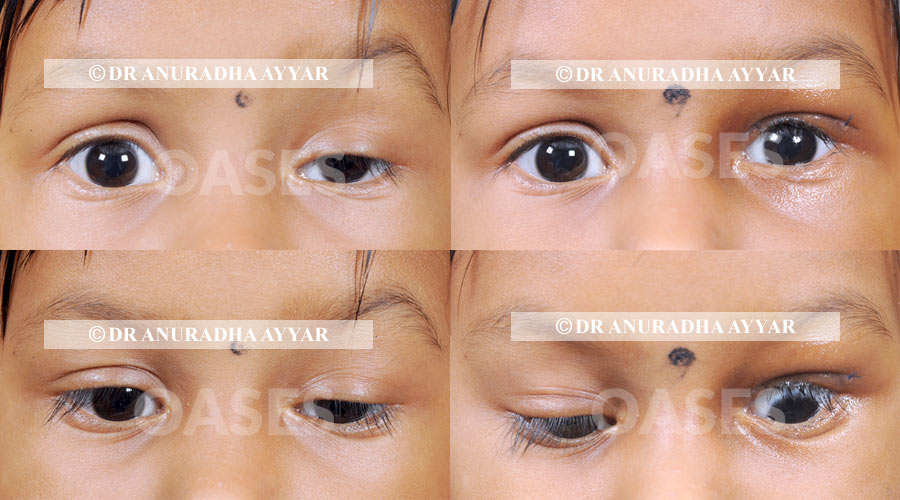 Children with Ptosis are to monitored regularly, ideally by the oculoplasty surgeon so that surgery can be planned at the right time before any of the above problems arise.

The child here was operated at age of 10 months, as the eyelid was covering the center of the eye and obscuring vision and vision development. In today’s age with the advent of safe anesthesia, children can be oeprated upon earlier rather than waiting till they are older in case of vision related issues due to eyelid droop/ptosis.

This child has Ptosis since birth and the eyelid muscle was very weak. Hence Ptosis correction was done using a frontalis sling surgery with a silicone rod to good cosmetic and functional results. 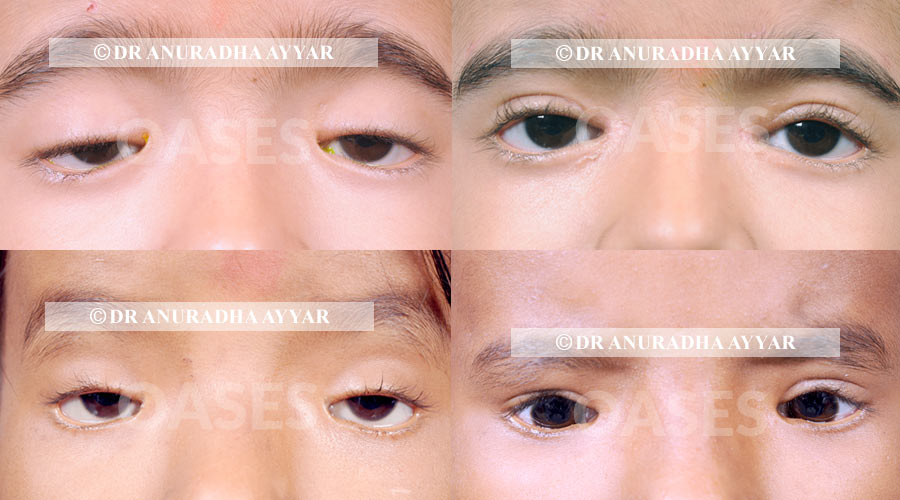 Blepharophimosis patients have ptosis in both eyes and often requires correction to enable them to see clearly. in childhood the ptosis correction alone is preferred. ptosis correction in these patients is often done with the frontalis sling surgery using a silicone rod.

As the child grows and once the facial skeleton has developed, further reconstructive surgery to enhance the shape of the eyes can be considered.