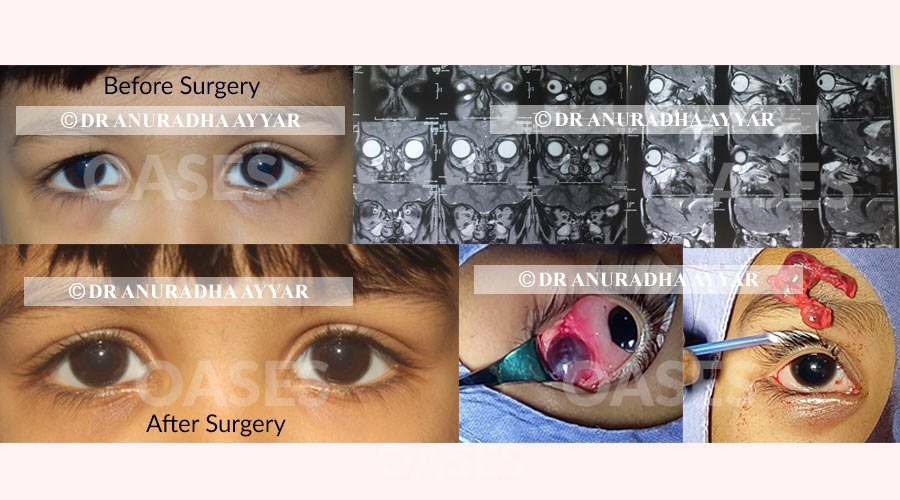 The orbit is the space that surrounds the eyeball, formed by bone on most sides. The orbit is packed with important structures: eyeball, muscles, lacrimal gland, many nerves, arteries, veins, fat.

Orbit is known as a Pandora's box, as it has an array of tumors, and disease that may arise in any of the structures above. Orbital diseases, tumors, trauma mandates examination by an Oculoplastic (also known as Ophthalmic plastic) Surgeon.

Disorders of the orbit are an area in which Oculoplasty surgeons are specially trained.

Here is a 3 year old child who was brought to us with a right lower eyelid swelling that was noticed since 2 months.

Clinically, a lymphangioma was suspected (a type of mass that contained altered blood). The diagnosis and extent of the mass was confirmed with imaging. The mass was in the lower part of the orbit and quite large.

Surgery was performed under general anesthesia through a transconjunctival approach.

The mass was removed in totality and sent for pathological examination, which again confirmed our initial diagnosis.

This child was operated for a dermoid under sedation. An upper eyelid incision was used to achieve best cosmesis. The sample was examined histopathologically to confirm the diagnosis.

The sutures used were absorbable and child recovered very well with a hidden barely visible scar.

All about Orbital Diseases & Tumors

The orbit is a complex structure that includes the eyeball, fat and lot of nerves and arteries and veins around it. Understanding all the nuances at work here requires a specialized form of education that is covered under ophthalmology. However, diving even more into detail are the oculoplastic surgeons that undergo specialized training in the orbit and diseases of the orbit and are especially surgically skilled in this area. At OASES, our team of oculoplastic surgeons are experienced and proficient at recognizing and treating all these diseases in an effective manner. Some of the diseases include:

Orbital dermoid is a benign cystic teratoma that is formed from ectodermal tissue. There are not attached to the skin and may be classified as a Dermoid cysts. This condition may present as a mass, or rarely cause protrusion of the eyeball, drooping eyelids or even double vision. A surgical treatment is required for a dermoid cyst, whether due to discomfort or even for cosmetic reasons with a good outcome.

Orbital cavernous venous malformation (cavernous hemangioma commonly) is a benign neoplasm found in adults. This condition progresses slowly and is a common orbital concern for adults. Prevention isn’t an option for this condition, however, it is diagnosed with an MRI after a physical consultation. In the initial stages, management of lesions may be done via routine monitoring. In case of larger lesions that may affect vision, or when the lesion causes protrusion of the eyeball, surgical excision will be required.

Idiopathic orbital inflammation (IOI), is also known as nonspecific orbital inflammation (NSOI) and orbital inflammatory syndrome or Pseudotumor (past nomenclature). It causes inflammation in various regions of the orbit and can be extremely painful. Based on the location and severity of the disease, the treatment method is decided which includes steroids most commonly as a mainstay treatment. In rarer cases other immunosuppressants, radiation therapy and/or surgery might play a role.

These tumors can be benign or malignant. Differentiating between the two is crucial for planning the correct treatment approach. Malignant lesions of the lacrimal gland can tend to be aggressive. Hence, any lacrimal gland swelling must be examined in detail by the Oculoplasty consultant. The diagnosis requires in depth history taking, clinical examination and imaging in the form of an MRI. A biopsy is likely to be done before planning surgical treatment. In high suspicion of malignancy, the entire gland may be removed without prior biopsy though, to decrease risk of spread and recurrence of tumor.

This is a form of neoplasm that impacts the peripheral nerve. The extent of the growth will determine the impact it has on the orbit and eye. At OASES we are very experienced in managing varying complicated cases of Neurofibromatosis along with a team of Neurosurgeons and plastic surgeons to achieve the best possible surgical outcome by removing the tumor and achieving adequate cosmesis with staged reconstructive surgery. Neurofibroma requires a comprehensive physical exam for an initial diagnosis. It may be followed by a CT scan and an MRI to determine the need for a surgical intervention. There are chances of recurrence of growth which the patient must understand well. When it comes to matters of the orbit, specialized training is crucial for timely detection and treatment. To ensure that your eyes are healthy, be sure to opt for a routine eye screening every 6 to 12 months at a trustworthy eye care center. At OASES, we have a specialized team of oculoplastic experts that are available to help you with any condition. 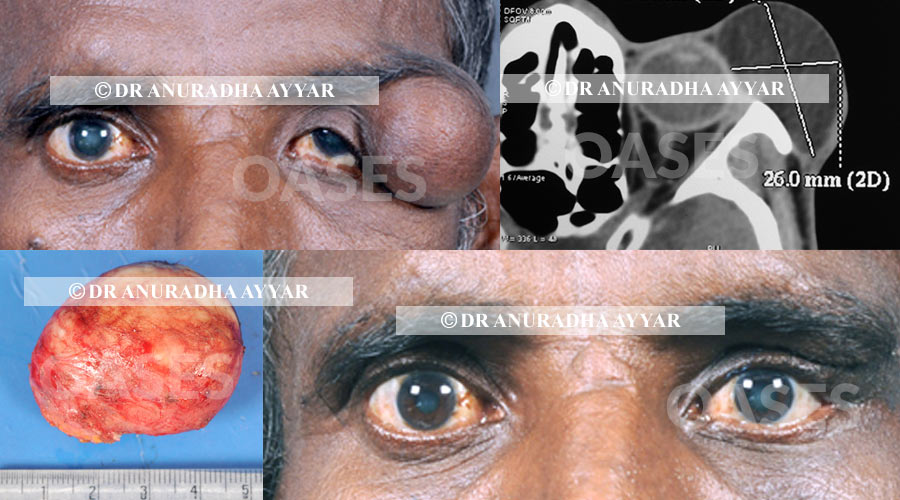 This patient had this swelling since 35 years!!

Now there was a pressure wound on the outer area which has started to ooze occasionally. Hence he decided to get it removed. An excision biopsy was performed and the huge dermoid was excised in toto.

This is easily one of the largest dermoids I have encountered in my career and was very exciting to operate upon.

The excess redundant skin was excised and wound was closed aesthetically. The patient and more so, his wife were ecstatic with the surgery result!

The dermoid under the right brow for this young girl was excised using an upper eyelid crease incision, which healed with good cosmesis and stayed hidden in the lid fold. 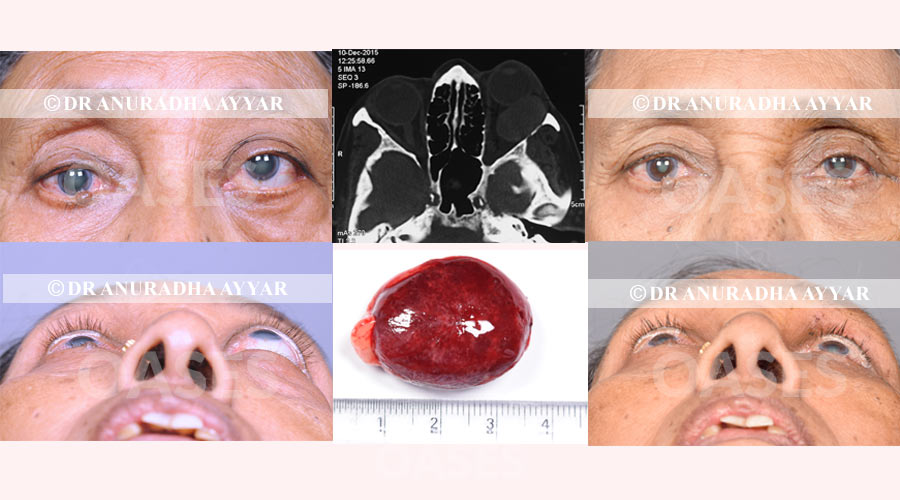 This 68 year old lady was brought to us for protrusion of the eye. Imaging studies showed a large well defined mass behind the eye.

Orbitotomy surgery was planned through an upper eyelid fold incision, and surprisingly what was planned as a 1.5 hour surgery was completed in 20 minutes, as the mass came out very easily in toto!

The incision healed well and best cosmesis was achieved.

The histopathology report showed this to be a circumscribed lymphangioma, which is a type of mass containing blood components.

This child had a hemangioma (a mass composed of very fine blood vessels and components) which was increasing in size, which led to drooping of the eylid. The child was monitored regularly for vision assessment. As the eyelid started to cover the visual axis, it was decided that intervention for this problem is ideal.

Most hemangiomas in children disappear between ages of 2 to 7 years. But in an event of vision getting affected or the mass increasing very fast, it is best to consider intervention.

Under short GA, steroid injection was done carefully into the core of the lesion. The retina was examined after the procedure.

In a month’s time the child returned looking as the picture on the right!